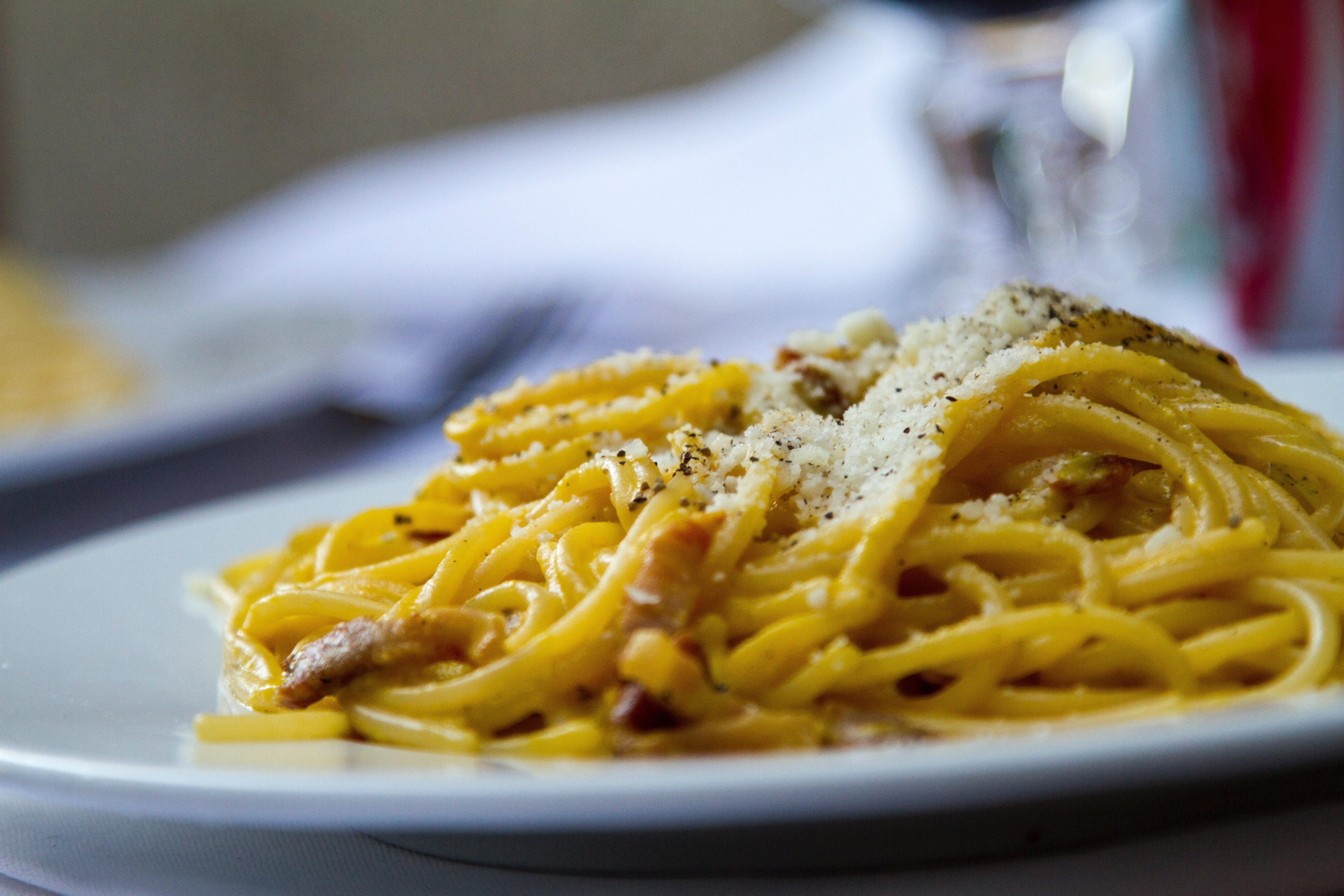 The first time I had cacio e pepe, I was sitting in an uncomfortable, metal chair on a street in Rome. It was hot outside, and I’d been traveling for a few months already. I was in end-of-trip mode, totally exhausted.

Don’t get me wrong, I love Italy. I plan on buying a home there in the next few years. My visits to that country have spurred me to take Italian classes and learn more (way way more) about wine.  But after months of living out of my tiny suitcase, months of taping mosquito netting up so I didn’t get bitten by the dog-sized bugs that come out of the Arno River in Florence, I was kinda ready to be in my own bed.

That last day, I wandered around the Colosseum, stumbled to the Trevi fountain, ate pistachio gelato while the Polizia shooed me away from sitting on any curbs. I was ready for air conditioning and no more tourists.

For dinner that last night, I really wanted to pick up a bag of chips and disappear into my room. Instead, I made my way to a cafe near my hotel, and I ordered a bowl of pasta.

And I fell in love. Forever. With cacio e pepe. The salt-forward dish, with its creamy sauce, simple ingredients, and traditionally hand-rolled noodles…it’s like sophisticated macaroni and cheese for adults.

I basked in the bowl, wondered if I could lick it without being stared at. I considered changing my flight so I could stay longer to eat more, and I checked to see if the restaurant opened before my flight time.

Unfortunately, I couldn’t eat it again on that trip. When I got home to Los Angeles, one of the first things I searched for when I landed was cacio e pepe on Yelp.

But whose is the best?

Here was my experience, and I’ll tell you my favorite cacio e pepe, hands down!

Ok, so I waited for my reservation to come up for a month. I drooled on myself when I thought about it. I read reviews. I starved myself the day my reservation arrived. I was fully prepared.

There’s no way that anyone could really reproduce true Italian food outside of Italy, so I always go in with the attitude of “do I like this interpretation of Italian food?” And Felix left something to be desired. I ate the squash blossoms, a pizza, and of course, the cacio e pepe.

The worst thing I ate there was the cacio. After waiting on this dish for months, I wasn’t impressed. It was watery—they’d not gotten the pasta water to cheese ratio right. Good cacio e pepe is a thick noodle, coated in a thick sauce. It’s not like alfredo sauce—like white glue—but it is supposed to lightly coat the noodles. Felix’s sauce didn’t. It dripped to the bottom of the bowl and sat there. It didn’t even coat the fork.

Also, the pepper they used had a super-lemony note, which was didn’t work well with the cacio (cheese) part of the pasta, which is a nutty flavor.

The wine selection though? It was beautiful! As a level one WSET (Wine and Spirits Education Trust) certified slight-snob, I was not disappointed. That’s not surprising, considering all anyone has to do is open a bottle, and pure Italy comes pouring out. Still, kudos on the wine menu.

I love Forma! I love all things cheese, so the cheese plate and bread were incredible. I racked up $50 just on a few slices of cheese, and I didn’t even blink an eye. Worth it.

The cacio e pepe though…again, it left something to be desired. It’s supposed to punch you in the face with salt, you’re supposed to close your eyes in bliss, savor each bite. But they used a cracked black pepper that had lemon and floral notes as well. Using the wrong pepper on cacio e pepe, when there are only two flavorful ingredients in the whole dish, ruins it by at least 50%.

Pepper is a weird animal, hailing from many different parts of the world. And like any other plant-based seasoning, where it grows dictates how it tastes. A strong citrus, bright flavor, does awful things to pecorino (cacio) cheese.

I’d skip Forma if you’re looking for true cacio e pepe. But definitely go there for nearly anything else.

I’ll admit, if Rose Cafe wasn’t close to me, I’d not even have given it a second thought. Besides, it isn’t exactly a traditional Italian restaurant.

I ordered their cacio e pepe pizza (yes, that’s a thing, apparently) and their off-menu, “hey, how’d you know about that” traditional cacio e pepe pasta.

The pizza was O-worthy. Seriously. I’d stab anyone with a fork who tried to take a piece. The pasta was also decent.

After the waiter heard I was writing an article about this, he hovered, waiting for my reply.

“Number two,” I said around a forkful of noodles.

He rolled his eyes.

The pepper was perfect, the sauce was a great consistency. But (and this is what nudges the number one place into number one), the noodles had the uniform, machine-pressed look and texture.

It just isn’t the same as…

Ok, first, let’s settle this—the name is pronounced with a “w” at the beginning. Like “whoa-vo.”

It means egg in Italian.

The restaurant ships in its hand-rolled pasta from Bologna, the pasta capital of Italy. The eggs there are different, the flour is different, everything about real Italian food is just…different.

So their cacio e pepe is…different. It’s the best I’ve found so far in Los Angeles.

The sauce is thick and creamy, the pepper is fine-ground and not overwhelming, certainly not citrus. The noodles are the perfect al dente.

So those are my top picks for having a taste of Rome, right here in Los Angeles.

What are your favorite cacio e pepe dishes? I know I can’t be the only one desperately searching for “the one.”