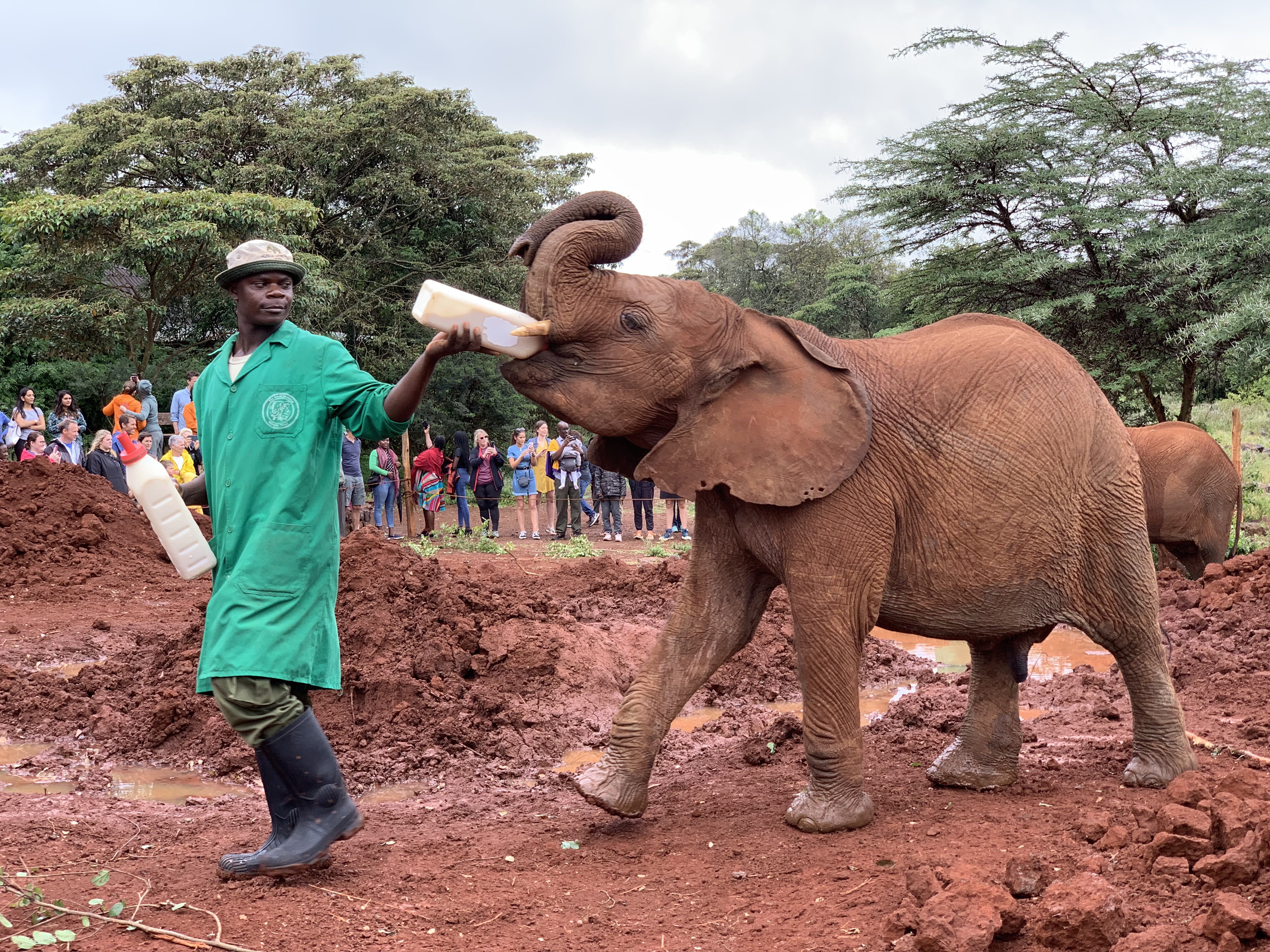 I got the chance to spend two months exploring 8 countries in East Africa this past winter and the David Sheldrick Elephant and Rhino Orphanage was the most memorable and touching experience of them all.

The David Sheldrick Wildlife Trust is a well-respected nonprofit organization which protects, rescues and raises orphaned baby elephants and rhinos. Adult female elephants can die from old age, starvation, other natural causes, and the brutal ivory poaching trade leaving the calves helpless without their mother’s milk and protection. DSWT’s mission is to rescue and rehabilitate orphaned animals and release them back into the national parks of Kenya. The nursey is mostly made up of baby elephants but DSWT will take in any animal in need. I was there in January, and DSWT had 19 elephants, 2 rhinos, and 1 giraffe in their care.

One of Africa’s most well known and famous wardens of Kenya’s National Parks was David Sheldrick. He spent over 20 years creating what is today Nairobi National Park, Kenya’s largest National Park. In 1977 Daphne Sheldrick (the widow of David Sheldrick) created the nonprofit trust in honor of her late husband.

Daphne’s love and knowledge of elephants spans her lifetime. She dedicated nearly 30 years testing and perfecting the milk formula fed to the baby elephants and rhinos today. An infant elephant cannot survive without its mother’s milk for the first two to three years of life. Finding the right formula was imperative for the orphan’s survival. Once the calves are off milk, DSWT reintroduces them back into the wild. It can take anywhere from five years or longer to reacclimate them with the other herds in the wild.

To learn more about this remarkable woman pick up her book, An Africa Love Story. I picked it up at the DSWT gift shop and once I started reading it, I could not put it down. It’s a heart-warming love story and memoir of her life in Africa and her family’s commitment to protecting the animals there.

DSWT opens its doors to visitors for only one hour daily for the afternoon bottle feeding and mudbath. Every orphan has their unique personality and story of rescue. As we listened to the moderator tell the stories of each orphan, our hearts broke just a little more. For some, they know what happened to the families. Others are found already abandoned so the ages of the babies are approximated.

These ridiculously cute, innocent, and helpless babies have no one else to help them. DSWT provides them with food, shelter, companionship, and protection. Born from one family’s passion for Kenya and its wildlife, the orphans are loved and cared for by their caretakers. DSWT is one of the pioneering conservation organizations giving these orphans a second chance at life.

To date, DWTS has saved over 200 orphaned animals.

The animals come first at the David Sheldrick Wildlife Trust (DSWT). As a result, you can have faith no animals are harmed for the sake of tourist. Therefore if Kenya is on your bucket list, make DSWT your first stop. In doing so, you will be supporting an amazing organization as well.

The animal encounters at DSWT are like no other. I found myself face-to-face with the tiniest white baby rhino and petting her nose. Her little horn hadn’t even grown in yet. Her name was Maarifa, which means ‘knowledge’ in Swahili. This rambunctious little lady immediately stole my heart. I decided to adopt her and went back to see her and the other orphans five times while I was in Nairobi.

Maarifa was just two days old when they rescued her from Maru National Park. Her mother was trying to save her infant, who was stuck in the mud but only making matters worse. After waiting patiently, the Rangers finally stepped in to rescue the calf. They tried to reunite her with her mother but she rejected the baby. They tried for two days with no success. She has been in the nursery ever since that fateful day. Unfortunately, I got an email on March 26, 2019, that little Maarifa passed away as a result of hypovolemic shock. It was devasting news to receive of Maarifa’s passing.

In my experience, DSWT was the best animal encounter I had in Africa. Why? Because it’s a much more intimate experience. At DSWT, you get to see them up close and interact with them but only if the animals feel comfortable enough to approach you. It’s truly a life-changing experience and for animal lovers, a must visit! Please note, it is very different from just encountering and observing them in the wild.

John Bunyan, the author of the classic book, Pilgrims Progress, said, “You haven’t lived today until you’ve done something for someone who cannot pay you back.” and those words have never been more real than for the animals of this earth. Following Daphne Sheldrick’s death in April 2018, their daughter Angela has now taken full responsibility for the organization to carry on her family’s legacy to protect these animals.

The ugly truth is the underground ivory and rhino horn trade is the main cause these calves become orphaned. An estimated 100 African elephants lose their lives daily to the brutal ivory trade. This leaves so many helpless baby elephants abandoned if lions or other prey don’t get to them first. The fate is no better for the rhinos as their numbers are rapidly declining as well.

While I was at the orphanage petting a baby rhino, watching baby elephants get bottle fed, and romp around in the mud — I was overwhelmed with emotions and questions. How can anyone harm one of these adorable creatures? What can we do to help? Money is the usual standard answer, but education and spreading awareness are even more paramount. When the demand for these products stops, so will the brutal killings. Your purchasing dollars are the single most influential statement you can make. Reconsider purchasing anything that contains Ivory, especially vitamins and medicines claiming any medical benefits from them.

DSWT is located inside Nairobi National Park about 7 miles Southwest of the city center of Nairobi. Ubers or Bolt are the best options for traveling around Nairobi and are often cheaper and safer than the local taxis. It should cost you around 750 – 1000 KES (roughly 7.50 – 10 USD) from the city center. Nairobi traffic can be horrendous, so do plan accordingly.

DSWT is open to the public every day for only one hour from 11 am to noon, except for Christmas day, for the midday feeding and mudbath.

I would highly recommend getting there as early as 10 am and queuing up so you can be part of the first few to get in. Once the gates open at 11 am claim a spot in the middle with some tree branches in front of you. The baby elephants like to stop and munch on them and will, therefore, be right in front of you once they feel comfortable enough.

We went to the 11 am feeding three times and found the rainy overcast day the best for interactions with the animals. When it’s too hot for the animals, they are not as inclined to walk around and prefer to stay under the shaded trees and mud instead.

It is incredibly dusty and muddy, so wear proper covered shoes. The baby elephants often throw mud onto the crowd, so be aware of that as well.

Ever experience a baby elephant pass gas? You just might at DSWT!

The minimum donation is just 500 Kenyan shillings (approximately 5 USD) and they only accept cash. However, strongly consider giving what you can as this experience is worth well more than five bucks.

It cost roughly 900 USD a year to raise an elephant. You can support DSWT by spending money at their gift shop or by adopting an orphan. It’s only 50 USD per year to adopt and you will receive monthly updates by email on the whereabouts of your orphan and rescue efforts for new orphans. As a foster, you also have access to the caretaker’s diary, exclusive videos, and the beautiful collectible monthly watercolors by Angela Sheldrick.

TIP: Every night the animals return from the national park to the stockades for their nightly feeding. As a foster parent, you can make an appointment to come back to the nursery at 5 pm for the evening feeding. This privilege is offered to foster parents only and must be booked in advance by contacting DSWT directly info@sheldrickwildlifetrust.org.

DSWT has three different eco-lodges you can stay at that practice responsible and sustainable tourism: Ithumba Cap, Ithumba Hill Camp, and Umani Springs. All funds from the lodges directly go towards the conservation of these areas. You can book your stay by contacting DSWT directly at info@sheldrickwildlifetrust.org for rates and availability.

Featured image and all photos by Young Lee @nakslee 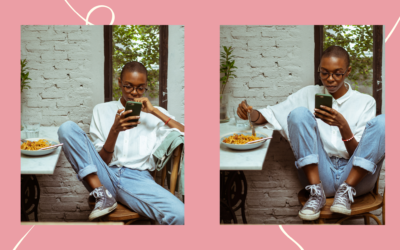 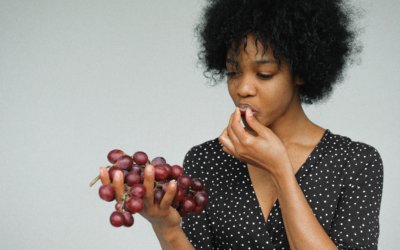 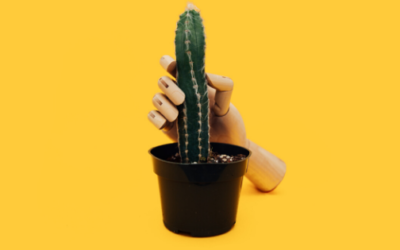